NEW FUNDING: Why We Invested in US Mobile  Read More

ASK JENNY ANYTHING: Volition Venture Partner Jenny Fleiss answers your questions: What Should I Expect During Investor Diligence?  Read More

LOS ANGELES, Oct. 28, 2019 /PRNewswire/ — BURST Oral Care, the company that revolutionized the oral care industry by making sonic oral care affordable and available to everyone through a direct ship subscription model, has reported 100% year-on-year growth. Having amassed hundreds of thousands of subscribers in just two years and receiving over 25,000 5-star reviews, BURST proves the appetite for high-quality dental products at an accessible price. 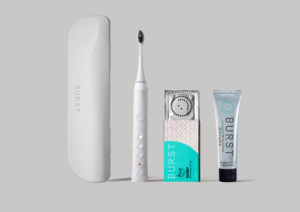 Over the past year, BURST partnered with Boston-based growth equity firm Volition Capital to fuel development and market penetration, securing over $20 million in funding from Volition and a small group of seed investors. With Volition’s support, BURST has been able to double down on its hiring process, expand operations and invest in its already robust Ambassador community.

“When we first met the founders of BURST, we immediately recognized they were tapping into something special in an industry that was ripe for disruption,” stated Larry Cheng, Managing Partner and Co-Founder of Volition Capital. “We were inspired by their vision and wanted to support the growth trajectory they were already on, capitalizing on their key strengths, such as product development and the Ambassador network, while identifying further opportunities. At Volition, we believe you need to earn the right to grow aggressively. It’s not growth for the sake of growth. BURST is the perfect example of a company that has earned that right.”

Co-founded in 2017 by Hamish Khayat and Brittany Stewart, the duo was disheartened by the excessive amounts that large brands were charging for high-quality oral healthcare. This ultimately led to BURST investing heavily in product development and channelling diversification over the past two years. Its Ambassador community of dental professionals, who recommend BURST products daily to their patients, has seen a 140% year-on-year increase to over 20,000 Ambassadors, with profit share growing year-on-year by 98%. As of October 2019, BURST has distributed $3.5 million to its Ambassadors, 95% of which are women.

“While there was a clear gap in the market for an affordable but effective electric toothbrush, our incredibly strong partnership with dental professionals has been key to the success of BURST,” said Brittany Stewart, COO of BURST. “From development and testing to sharing our products with their network, BURST’s Ambassadors have been part of the team every step of the way. We’re proud to have fueled a grassroots movement of independent dental professionals who are just as passionate as we are about modernizing a tired industry.”

BURST is further expanding its sales channels, with a launch on Amazon announced this October, and will be releasing new clinical trial data demonstrating the efficacy of sonic oral care products compared to manual toothbrushes in improving oral health. For example, after 30 days, the BURST sonic toothbrush reduces plaque up to 10.6 times more than a manual toothbrush.

“BURST is dedicated to better informing and enhancing the nation’s oral health,” said Hamish Khayat, CEO of BURST. “Our unwavering commitment to ensuring affordable high-quality products are available to as many people as possible has attracted loyal fans who want to be part of the journey – whether that’s consumers, dental professionals or investors. With further injection of capital, we’re energized to launch new lines, craft beautiful and fun designs, and  drive innovation in the oral care market.”

BURST launched in 2017 and quickly became one of the fastest-growing eCommerce companies in the US. A trailblazing subscription oral care company, BURST developed its premier sonic toothbrush in collaboration with a community of dental professionals. Determined to shake up a sector that has felt tired and dominated by large corporations for too long, its goal has always been to bring the finest oral care to everyone at a price that’s fair and to have fun while doing it. For more information, visit www.burstoralcare.com and follow @burstoralcare on Instagram.

About Volition Capital
Volition Capital is a growth equity firm that principally invests in high potential, founder-owned companies across different technology and consumer sectors. The firm selectively partners with founders to help them achieve their fullest aspirations for their business. Much of Volition’s success has come from investing in founder-owned, capital-efficient companies in sectors such as: enterprise SaaS, consumer e-commerce/brands, tech-enabled services, and transactional applications. For more information, visit https://www.volitioncapital.com.