Get the latest News & Insights from Volition delivered right to your inbox..
8 MIN READ

Under the White House’s Guidelines for Opening Up America Again, social settings of more than 50 people should be avoided until Phase Three, the final phase of the plan for states with no evidence of a rebound. As a result, an estimated tens of thousands of weddings have been postponed, nearly every major sporting event in America ranging from the Boston Marathon to the Masters golf tournament has been suspended, and theater release dates for major film franchises like James Bond, Wonder Woman, and Top Gun have been delayed, to name just a few implications. 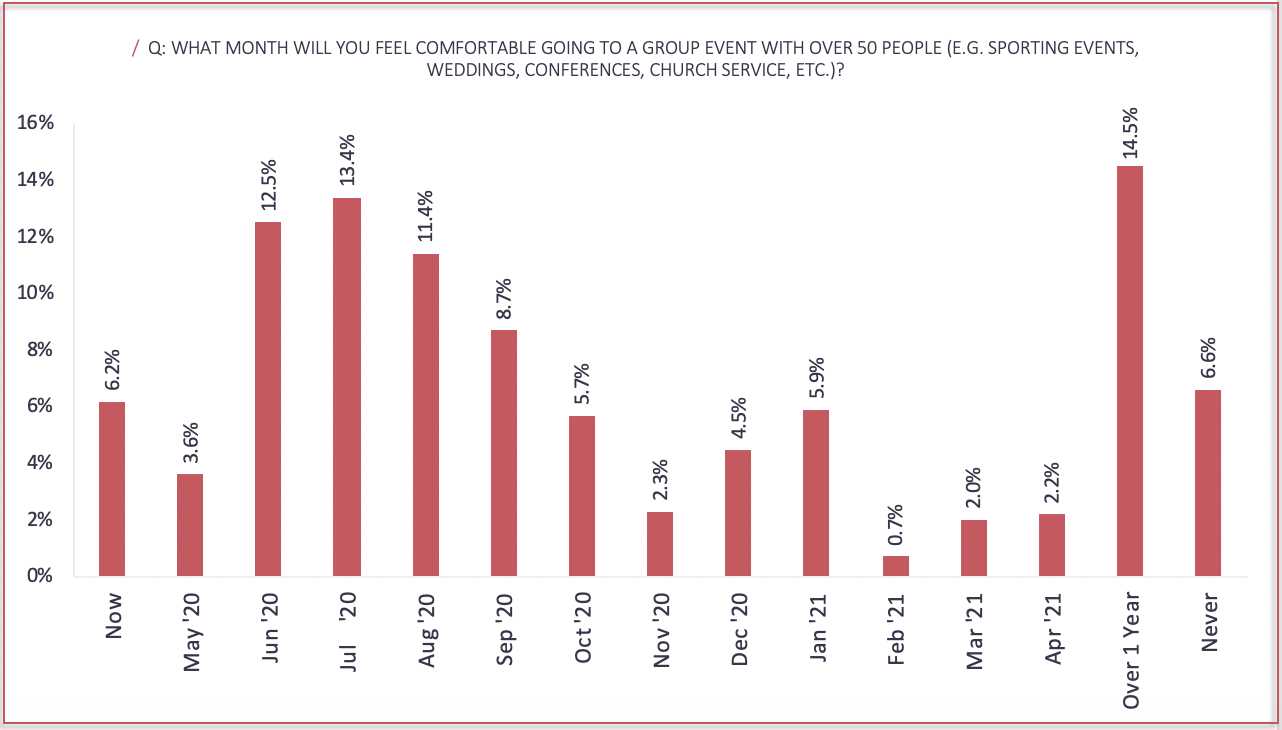 As the entire live events and entertainment industry seeks to identify growth opportunities during these challenging times, it is revealing to cut this data for various demographic profiles. Factors like age, gender, geography, income, and personal priorities play a major role in determining when a person plans to re-enter group settings. These insights may help challenged businesses to plan their recovery strategies accordingly, with products, pricing, and operating models that either target groups ready to re-engage, or cater to those still seeking an at-home solution. Below, we explore major demographic trends driving social distancing behaviors, and the implications for a post-Covid economic recovery.

8% of male respondents would attend a large group gather today, compared to 5% of women. Additionally, 49% of male respondents reported they would feel comfortable attending large group gatherings by or before Summer 2020, compared to 46% of female respondents. Given that women with families are often the decision-making unit for their children’s day-to-day activities, slightly more conservative female attitudes regarding group events may have broader implications for the entire household. At-home activities that provide social, educational, and entertainment value to children and entire families are likely to be in high demand.

Household Income Under vs. Over $100k

20% of respondents living in households with an income of over $100k report that it will be over a year before they feel comfortable in large group gatherings – nearly twice the percentage of those with household incomes under $100k who reported the same. Households with higher incomes may have more access to savings, making it easier to stockpile supplies, access enabling services such as WiFi, and remain at home. Members of these households may also be more likely to hold jobs that are amenable to work-from-home protocols. On the other hand, respondents with lower household incomes may be more likely to work in essential services roles that have kept them on the front lines of the crises. These respondents may also find it more challenging to remain comfortable and productive at home.

Businesses in the live entertainment industry may need to revisit pricing models if lower-income households are more likely to lead the way in the re-opening of the economy. Sporting events, live theater, concert venues, and other similar businesses will likely need to find ways to reach out to a new cohort of attendees with accessible pricing to encourage attendance.

Notably, 14% of respondents in Volition’s Consumer Sentiment Study believe they have had the virus, despite less than 4% having received testing. In order to minimize the potential for a resurgence of the virus, live event businesses will likely need to implement some combination of biomarker gathering, pre-event testing and contact-tracing measures for all future attendees, to ensure that consumers’ perceptions of their experience with the virus align to their true ability to infect others or to be infected. These operational enhancements will likely require new capabilities within organizations and could also impact the process and timeline for purchasing event tickets.

Most Concerned About Physical vs. Mental vs. Financial vs. Spiritual Health

Of those who were most concerned about their financial health, 9% would attend a large group gathering today, possibly indicating a broader desire to re-open the economy and engage in normal events in order to stimulate markets. Of note, those who were most concerned about their spiritual health were the most likely to feel comfortable attending a large group gathering today, presumably a religious service, at over 10%. These attitudes align to an ongoing nation-wide debate around whether religious services should be deemed essential services, in keeping with the principle of religious freedom.

The persistent demand for in-person worship services suggests that the at-home alternatives offered by various religious organizations today are insufficient. In the religious services category, and likely in other categories that are difficult to translate to an online format, there is clearly latent demand for enhanced online tools and platforms that deliver a superior service digitally.

Responses varied dramatically amongst regions. Residents in New England states (Maine, New Hampshire, Vermont, Massachusetts, Rhode Island, Connecticut) were the least likely to report being comfortable attending a large group gathering right now, with less than 4% responding affirmatively. In contrast, residents of the East South Central region (Kentucky, Tennessee, Alabama, Mississippi) were the most likely to be comfortable right now, at over 18%. Residents of the West South Central Regions (Arkansas, Louisiana, Oklahoma, Texas) were most likely to report long-lasting caution as a result of the virus, with the highest percentage of respondents reporting that it would take over a year to feel comfortable in large group gatherings (19%) as well as the highest percentage reporting that they would never feel comfortable (12%).

Geographic attitudes towards large group gatherings appear to be more closely aligned with how various states voted in the 2016 presidential election, versus how each state has experienced Covid-19 from a fatality perspective. This finding suggests that impressions of the virus remain politicized, and highly influenced by messaging from elected officials. State governors will likely play a critical role in determining both the speed and the safety of their various states’ economic recoveries. 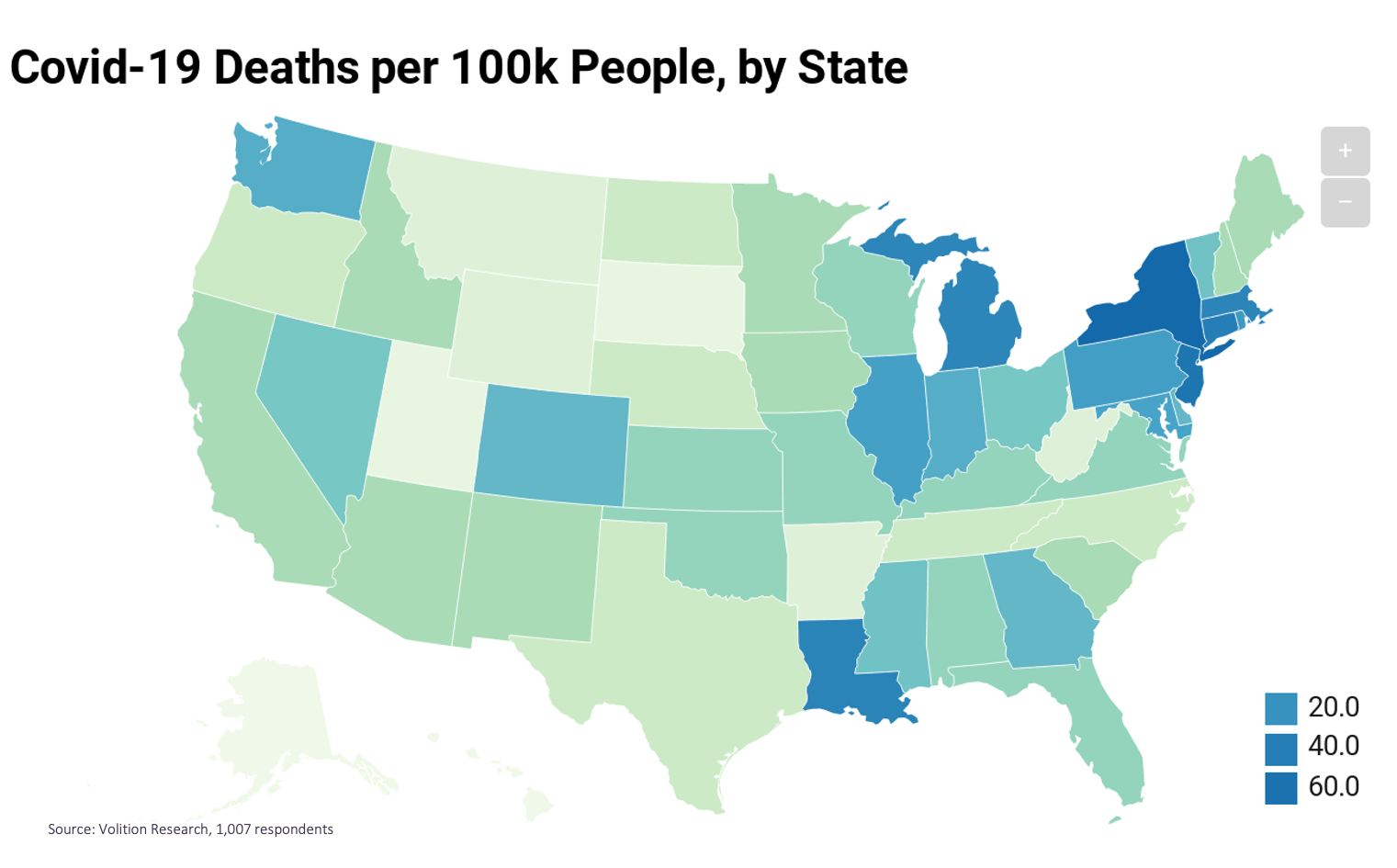 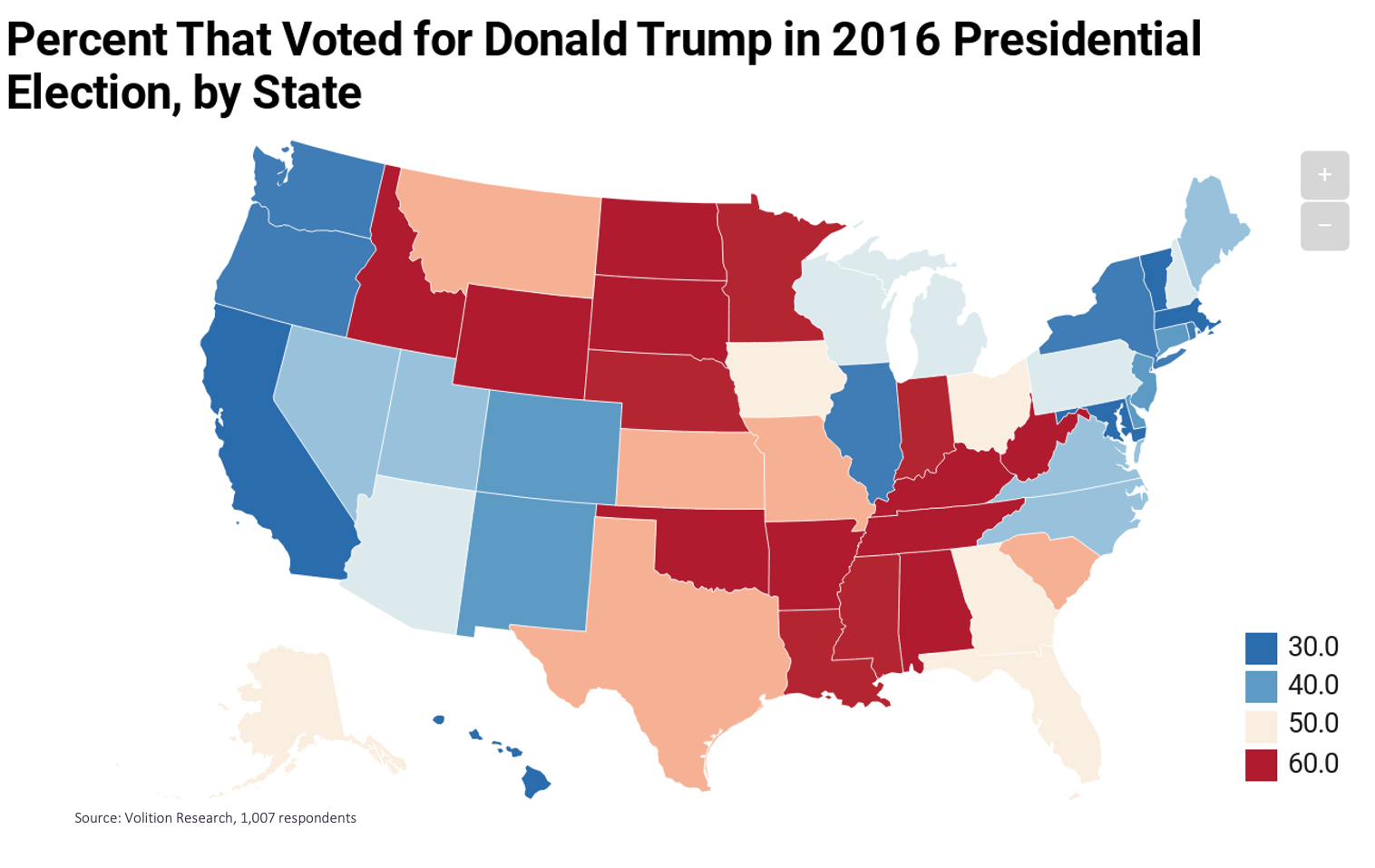 The ability to gather as a society has intangible value that extends beyond economic stimulus. As a bride-to-be hopefully planning an August 2020 wedding, I have spent the past few weeks contemplating the inherent intimacy limitations of streamed versus live events. There are innumerable cultural touchstones that simply cannot be replicated over Zoom, and the timeline for the return of such events remains unclear. However, we believe that demographic analysis to inform strategy for ongoing business operations and eventual re-openings – including product positioning, pricing, operational capabilities, and technology enhancements – is a valuable exercise in the current climate.

Please reach out with your thoughts and feedback! 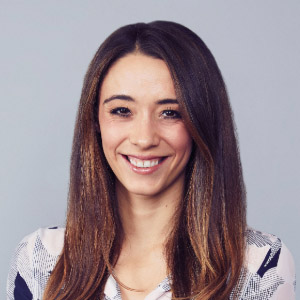 Claude joined Volition Capital in 2019 to further strengthen the digital expertise on our Consumer and Internet investing team. She’s focused on investments in direct-to-consumer products, tech-enabled services, and marketplaces, with sector interests in beauty and wellness, age tech, and healthcare.

Claude holds a BA from Yale in Economics and Environmental Studies, and an MBA from Harvard Business School.