Get the latest News & Insights from Volition delivered right to your inbox..
9 MIN READ 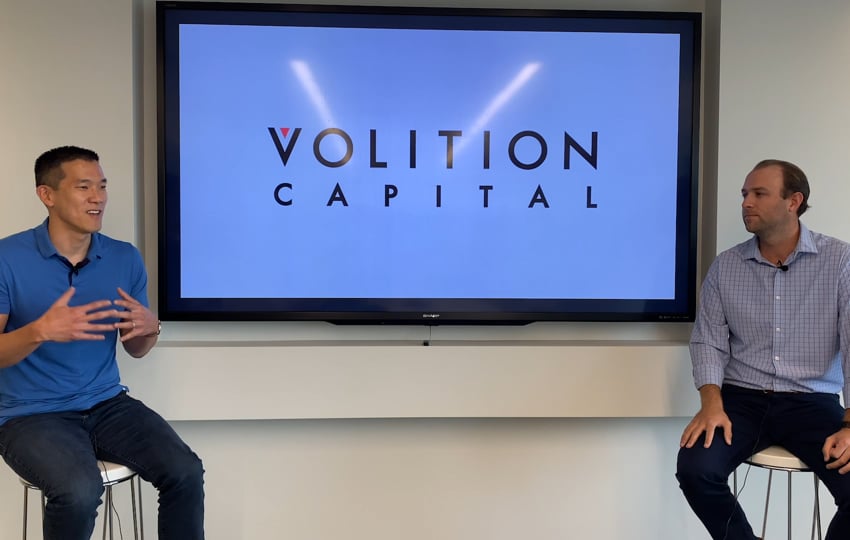 Transcript from Video:Larry Cheng and Jim Ferry Take a Look at Trends in Digital Insurance

Larry Cheng: I’m Larry Cheng, and I’m a managing partner and co-founder at Volition Capital. I am here with Jim Ferry, who is one of our vice presidents, and we’re here to talk about digital insurance.

Jim has been leading our effort in that, so we’ll chat with him about that. Jim, what caught your eye about digital insurance, to begin with? Why is it an area that you want to spend some time on?

Jim Ferry: Across every single insurance category, digital insurance is really disrupting the way that insurance is bought and processed. So that could be consumer-facing or even for businesses. Part of that is because the legacy incumbents in the insurance industry really have lacked any innovation for a couple of reasons.

One of them is really they haven’t had any challengers come up. If you look at Lemonade, that’s kind of widely considered one of the most successful digital insurance startups, given their IPO. Despite this, they’re less than half of a percentage point of net written premiums compared to some of the larger incumbents. So there’s really been no challengers to force their hand to have any digital innovation.

And number two, I think one of the other big reasons is they’re lacking the infrastructure to do it. They’re operating on 40+ year-old systems, and so much of their investment has been updating those systems to even allow any consumer Internet-facing purchasing or processing

Jim Ferry: Yeah, I think it’s really price and convenience. They’re able to offer a better price compared to traditional incumbents because they have less overhead. There’s less manual intervention. If you think about the claims processing, it takes a long time because there’s manual intervention there. And that also leads to much higher prices as having someone that’s actually touching the claim can add 20 to 30 percent of the cost. So there’s really an opportunity to offer better prices at more convenience to the consumer.

Jim Ferry: I think a lot of startups in the digital insurance face begin as a managing general agent (MGA). So they’re not taking on any risk. They’re really just a website or online presence that has a back end of a carrier or reinsurer that’s handling all the risk.

But we’re seeing some innovation where once you gain scale and maybe have a brand, Hippo’s a great example of that, they actually transform into the carrier. So they acquired Spinnaker, another carrier, to actually bear all the risk. So you need to build up enough data points to figure out your loss ratios and everything. And then you can actually make that transition, which we’re seeing a lot of startups start to do. Lemonade has done had a similar model as well.

Larry Cheng: So I’ll put you on the spot if this is fair. So are you telling the folks who are watching this that if they go online right now, whatever types of insurance they might buy, homeowner’s, rental, and maybe some type of business insurance, that they can better get a better rate through a digital insurance company today than whatever they’re using if it’s a legacy provider? Do you think it’s that clear today?

Jim Ferry: I don’t think today. I think that’s where we’re going. I mean, if you think about even the auto industry, I think every single legacy incumbent claims that they can save you seven to 15 percent. They can’t all do that. There needs to be some give there.

So I think we’re heading that way as the digital insurance companies figure out ways to cut costs. But I think that they are trying to make some noise. If you look at Allstate, they just cut eight percent of their workforce. And part of that is they’re trying to offer more competitive pricing. So I think the wheels are starting to turn where the incumbents are starting to think about how prices are going to vary in the future.

But one thing I’d say that is even in auto insurance, we’re thinking about a pretty traditional plan where you’re paying your premiums. Just based on some data that providers have on your historical driving record, companies like Metro Mile and some of the legacy companies such as Progressive have plans based on your driving behavior now. So there are different types of insurance that you can have when you have an updated infrastructure and more of a modern system.

Larry Cheng: It’s interesting when you talk about some of the cost advantages that emerge that digital insurers provide. It does remind me of e-commerce, as you guys all know, we’ve spent a lot of time in e-commerce and the legacy providers and e-commerce are the traditional retailers and they have great investment into their retail distribution channels.

They have channel conflict with going online. And in some ways, all of the incoming providers in this space have, if they’re using an agent-based model, which many are, have significant channel conflicts. And so they’re caught in between that. So it’s an interesting dynamic. As consumers inherently go more digital and more self-service, what is an incumbent to do?

Jim Ferry: We’ve had success historically with an investment pipeline, as you know. But I think that if you look at a lot of the billion-dollar plus startups in the insured tech sector over the past 10 years, there’s been a shift where everything used to enable the carriers and now everything is all about being an MGA or being your own carrier and owning the customer.

So there’s a transformation happening in the digital insurance world where it seems like most of the value is being built with companies that own the customer. If you look at Lemonade in the public stock market,  it’s trading at ridiculous multiples because people think that’s the future and there’s going to be ways to bundle other types of insurance into renters.

Larry Cheng: Let’s spend some time on that. Lemonade’s valuation has been a hot topic in the public markets, given their book of business is relatively tiny against the incumbent books of business. Why in the world are they valued so highly? Do you think that makes any sense? Do you think that will rationalize over time and come down? And what are your thoughts on Lemonade’s valuation?

Jim Ferry: As a somewhat rational investor, I’d say it’s hyper-inflated and it’s probably overpriced right now. There’s been a lot of hype around it. I think what they’re doing is very interesting from a cost structure perspective in the way that they’re paying out claims instead of a traditional carrier that, you know, every time they pay a claim, it hurts their bottom line.

Lemonade is a little bit of a unique model that a lot of digital insurance startups are adopting where they basically take a twenty-five percent fee off of the premiums and the rest of the seventy-five percent can be paid out and it doesn’t hurt their bottom line at all. So it aligns the consumer a lot more, which I think the market likes that there’s this alignment. It’s trading really high relative to a normal insurance company, which at the end of the day still an insurance company, despite some technology layered on top of it.

I think that people are betting on them, the ability for them to be able to layer in different insurance lines over time. But the marketplace for growth in the market right now is paying for futures. If you ask me the same question on Tesla, whatever the last five, 10 years ago, I probably would have said it’s really overvalued at the time, and they’ve had a pretty good run.

Larry Cheng: In the world of insurance, there are lots of different segments. I’ll put you on the spot again. Is there a segment within either business or consumer insurance that for some reason you think it’s really ripe, really ripe for disruption? And is there a segment that you actually think we shouldn’t touch that? And I guess this gets to the question of what attributes are you looking for within a given sub-sector of insurance that makes it more predisposed to be digitized?

Jim Ferry: Yes, it’s an interesting question, and I don’t know if I have the answer to say, like, these are the exact sectors that are sub-sectors that we’re looking for. But what I’d say is we think it’s going to be somewhat difficult to compete in some of the traditional PNC, you know, auto, home – even life. Just because you look at Progressive and Geico, they’ve billion-dollar marketing budgets. It’s going to be really hard to compete on brand there. So you need to compete on price and you need to figure out how loss ratios work in that scenario.

I think where we’re looking is maybe you could compete in those channels if you have a unique customer acquisition strategy. We’ve seen that even with some very e-commerce companies like Burst that does not rely just on direct to consumer advertising and Facebook and stuff but have a channel of dental hygienists that are helping sell as well. So they have a unique customer acquisition channel for an electronic toothbrush.

You know, I think we’re looking for more niche areas. So I think commercial, even parametric insurance, cyber travel, insurance, so even pets. So these are large, multibillion-dollar industries that seem more ripe for customer acquisition on a digital scale as opposed to some of the other ones will be harder.

Larry Cheng: Yeah, we’re huge fans of digital disruption in large recurring spending markets, whether it’s a pharmacy, whether it’s pet food, whether it’s other areas like digital insurance. And I think we’re big fans of this area because when you slice every single segment, those are many, many billion-dollar markets in and of themselves. A

nd we love it when incumbents have channel conflict. We love it when you resolve that conflict, that you can get better pricing to customers and combining better pricing with better service, leveraging technology-enabled platforms. There’s a lot of digital insurance companies are doing. It’s a huge win for the consumer and business customers. So we’re excited about pursuing this more. And there’s more content coming on this category on our blog. So stay tuned. And thanks so much!