Get the latest News & Insights from Volition delivered right to your inbox..
4 MIN READ

Original article posted in the WSJ on November 26th, 2019 by Yuliya Chernova

Florida-Based Company That Has More Than 2 Million Customers Secured $24 Million In Funding From Volition Capital.

Volition Capital, an early investor in pet supplies seller Chewy Inc., believes it has found another diamond-in-the-rough in South Florida.

This time the Boston firm invested $24 million in a profitable art-supplies maker, Arteza Inc. The Series A deal is Arteza’s first institutional outside investment. 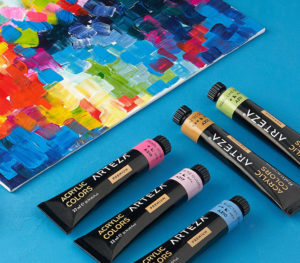 Like other e-commerce upstarts, Arteza is trying to make a dent in a staid category by launching a new brand that leverages social media and other digital tools to appeal to consumers.

“Every single consumer category is under attack from emerging brands,” said Larry Cheng, managing partner at Volition Capital, who now sits on Arteza’s board.

But the deal also represents what many venture capitalists operating in hypercompetitive and overcapitalized Silicon Valley rarely find—a high-growth, profitable startup that has raised no institutional funding.

In places like Florida, investors are more likely to come across “more grounded businesses that are frankly driven by meeting customer needs rather than by raising money,” Mr. Cheng said.

That means that often Mr. Cheng goes where VCs rarely tread. Mr. Cheng says he was slightly taken aback when he pulled up earlier this year at the nondescript office in a North Miami Beach strip mall to meet the team at Arteza, which someone in Volition’s network recommended as one of the fastest-growing startups in the Southeast.

During the Arteza meeting, which Chewy’s co-founder Ryan Cohen also attended, Mr. Cheng was impressed by Arteza’s scrappy immigrant founders, Mike Koshatko, originally from Ukraine, and Jurgis Plikaitis, from Lithuania, and what they have accomplished since Arteza’s launch in 2015.

Arteza has more than 2 million customers buying its premium supplies, which it says are sold at affordable prices. The business expects to generate revenue in the range of “double-digit millions” in 2019, Mr. Cheng said. That would represent more than double last year’s sales.

With Volition’s capital, the company plans to double the number of products it sells from about 750 now, according to Mr. Koshatko.

“We are a one-stop-shop for different products. So that people can buy any art-related product in one place,” he said.

To generate its quick growth without high marketing costs, Arteza produces craft tutorials and posts them on social media, where the company has a strong following.

“There are many high-growth e-commerce companies that are fueled by irresponsible deployment of capital. This was not the case,” Mr. Cheng said. In that way, the company is similar to Chewy, a Dania Beach, Fla.-business where Volition was a first investor. The e-commerce company was sold to PetSmart Inc. for $3.35 billion in 2017.

Arteza is operating in a busy market dominated by established brands such as Crayola, Prismacolor, Sharpie and Paper Mate. Arteza sells directly through its website, a new retail presence at the Sawgrass Mills mall in Sunrise, Fla., and through Amazon.com and other online retailers.

Some 63% of U.S. households participated in an arts-and-crafts activity in 2016, spending roughly $44 billion, according to a report by the Association for Creative Industries and MaritzCX LLC.

Arteza’s founders have no background in art and landed on the business idea through research.

Before Volition’s funding, the company was funded by the founders’ capital, personal credit cards, and small-business loans, Mr. Koshatko said.

Before founding Arteza, Mr. Koshatko was selling coasters and other home goods online and had a real estate agent license, while Mr. Plikaitis previously owned a cryptocurrency business, as well as car-auction and coconut-water businesses.

The company now employs about 40 people in its North Miami Beach headquarters, and more than a 100 in Minsk, Belarus.

Arteza’s first product was a set of 60 gel pens that did well in the market in 2016. By the end of its first year of sales, Arteza had 50 products on the market.

“It’s a passion category, where customers have a lot of emotional connectivity to the brands that they are buying,” Mr. Cheng said, adding that art supplies are a consistent category that isn’t strongly correlated with economic cycles.

Write to Yuliya Chernova at yuliya.chernova@wsj.com