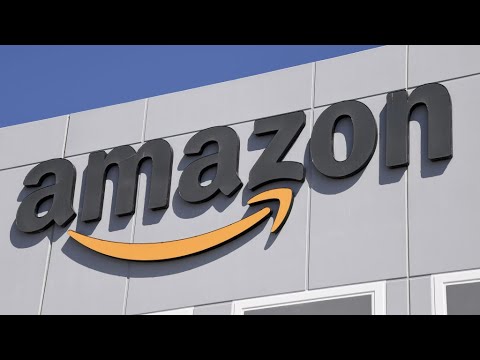 ZACK GUZMAN: Welcome back to Yahoo Finance Live. A couple milestones to note here in what has been a very strong start to February for the overall indices. We can see here, the Dow and the NASDAQ in the green, the S&P 500 the lone index just slightly below break even today. But all three, including the Russell 2000, hit record highs today in the session. We’ll continue to track that and bring you updates as we see them play out.

But right now I want to shift our focus to one of the stories we saw play out last year that spilled over into 2021. That would be the strength of e-commerce and the battle going on in that space as others chase to catch up and catch Amazon. Here to discuss that with us is Larry Cheng, Managing Partner at Volition Capital.

And Larry, I mean, Amazon’s been focused on this space, but what’s interesting to me is kind of the shift of their attention over to the cloud side of the business, including that changeover in the CEO role, as Jeff Bezos moves on. But how important is their lead in the retail space going to be as they still take on, you know, pretty big giants in Walmart and others?

LARRY CHENG: Well, Amazon is the dominant e-commerce player today and they will stay that way for the next 10 years. But we do think they will be on a secular decline in market share because the big box retailers are investing in e-commerce quite effectively. The Shopify ecosystem is expanding aggressively, and there’s tremendous amount of venture dollars that are pouring into various specialty e-commerce players like we did with Chewy in the pet food vertical or Wayfair in the furniture vertical and other upstart players are competing well against Amazon in some of those specialty areas.

– Yeah, Larry, I think is interesting you highlight that and in your note you say Amazon can be beaten. Which sounds like you’ve got a lot of conviction behind that call. That’s a pretty bold one. And in the past when you look at some of these specialized players, the idea has been to partner with an Amazon. Some have been acquired by Amazon. You think we’re starting to see a bit of push-back on something like that?

LARRY CHENG: Yeah. So I do think Amazon can be beaten, but let me say more specifically, in specific specialty verticals. If a business is completely focused on winning a customer in a particular area, whether it’s grocery, pet, furniture, pharmacy, alcohol delivery. These are areas where if an entire business is focused on it, they can provide a premium service, a better community, stronger merchandising, better content for that customer in those categories. And there have been billions of dollars created by companies like Chewy, Wayfair, and Carvana, who have specialized and won. So yes, we do think Amazon can be beaten in these areas.

Will Amazon be beaten in e-commerce as a whole? Probably not. I mean, Amazon is doing tremendously well. There’s great secular growth drivers for them, but in specialty verticals they can.

ZACK GUZMAN: And then just kind of to tie it back to the cloud space too I mean, how does it maybe matter in terms of the trade-off there, and not to say that they can’t focus on both things at the same time because let’s be honest, it’s Amazon. But I mean, obviously, these other retailers in catching up might putting their own attention so heavily into the retail race, when you look at a Walmart or some of the other names you mentioned there.

LARRY CHENG: The great advantage of Amazon in retail is that they don’t have to make money on retail. So they have AWS, they are the internet infrastructure provider for the internet. They are an outsource third party fulfillment capability for a number of e-commerce brands, they have a massive online ad network through their third party online retail business.

All of this generates cash, which enables them to keep their core first party e-commerce business at a low margin, a low price point. They can make massive strategic investments over a decade long period. And there’s no other retailer in the world that doesn’t have to make money on retail. And that is the advantage that Amazon has and that’s why I think they will continue to make those investments in the cloud and they will continue to compete in those ways.

– Yeah, one of the reasons why we talk so much about Amazon is because it does feel like they really own the full stack. It’s not just about the platform itself. It’s about the logistics play. It’s about the cloud play. When you look at all of the growth outside of Amazon though, what kind of opportunities does that open up for somebody like you as an investor? I mean, what are some of these areas, whether it’s a Shopify or some other players out there who are supporting in the cloud space, who are helping with the infrastructure that you think you see real opportunities for growth?

LARRY CHENG: Well, as a big experiment, our entire team has decided not to shop on Amazon for the last month. So we’re in the last week of that experiment and what I learned from that is the Shopify ecosystem is competitive, the retailers have built on that platform.

But that ecosystem is growing. I think there’s a number of retailers that are platforming on Shopify rather than on Amazon, and so I think you can see growth there. The big box retailers like Target’s now a $10 billion e-commerce business, Home Depot is a $10 billion e-commerce business, Nordstrom’s and Best Buy, half of their business is on e-com. And so you see– you’re seeing acquisitions and investments being made by traditional players, that is also growing their share in the e-com space as well.

ZACK GUZMAN: All right, Larry Cheng, Managing Partner at Volition Capital. Good luck with the last days of that experiment. Appreciate you joining us to chat that.