The Rule of 40: Growth, Profitability, and the Tortoise and the Hare

We all know the story of the tortoise and the hare. The moral is, of course, that slow and steady wins the race. Speed can lead to mistakes and miscalculations, whereas thoughtful and measured progress can propel a tortoise to victory. Does this mantra hold true for startups?

With a number of challenged IPO’s, along with the recent market correction, investor sentiment is beginning to shift away from companies riding on the back of a growth-at-all costs model. Some investors are starting to advocate for a more tortoise-like approach, prioritizing steady profitability over speedy growth.

There has been a lot written about SaaS metrics and when to invest in continued growth. Due to the highly recurring nature of SaaS businesses, it can make sense to spend ahead of the curve on sales and marketing. While you may lose money in the short term, the recurring nature of a client can lead to long-term profitability for that individual client. Ultimately, the unit economics (and capital availability) should dictate a company’s willingness to spend ahead of the curve. But how does that translate into the P&L? And how do the public markets evaluate the trade-off between growth and profitability? To aid this process, there is an increasingly popular “back of the envelope” calculation used to assess the value of public SaaS companies based on the trade-off between growth and profitability.

It’s called the Rule of 40. In essence, the Rule of 40 is achieved if year over year revenue growth rate plus profitability margin equals 40%. We took a deep dive into the Rule of 40, charting 65 publicly traded SaaS companies in 2018 and 2019. Our goal was to answer the following questions:

Overview: The Rule of 40

SaaS companies have historically been difficult to value due to guidelines on the recognition of future recurring revenue. Data on public companies would suggest that the greater the sum of a company’s growth plus profitability, the greater the revenue multiple assigned to that business. This implies that the answer to growth or profitability is not one or the other but rather the impact of one on the other. The sure fire way to maximize value is to have a high growth, high profitability business in a huge market. These are extremely rare.

The rule has become an increasingly useful metric to evaluate companies at scale, with companies achieving the Rule of 40 commanding a premium valuation.

What Does the Data Say?

In our analysis of the Rule of 40, we looked at 65 publicly traded SaaS companies in 2018 and 2019 using Capital IQ1. Here are three conclusions:

Generally speaking, companies with high revenue multiples do beat the Rule of 40. Looking at the top right quadrant of the chart above, you’ll see that companies in this quadrant had the highest median revenue multiple of any quadrant at 12.2x.

On an individual company level, we generally see higher multiples, colored green and blue, above the Rule of 40 line. However, there are some exceptions like J2 Global (JCOM), which beats the Rule of 40, but still has a lower multiple of 0-5x. You can read more about exceptions to the Rule of 40 here. This indicates that the Rule of 40 is a surface metric that can provide base-level insights that should then be investigated further. 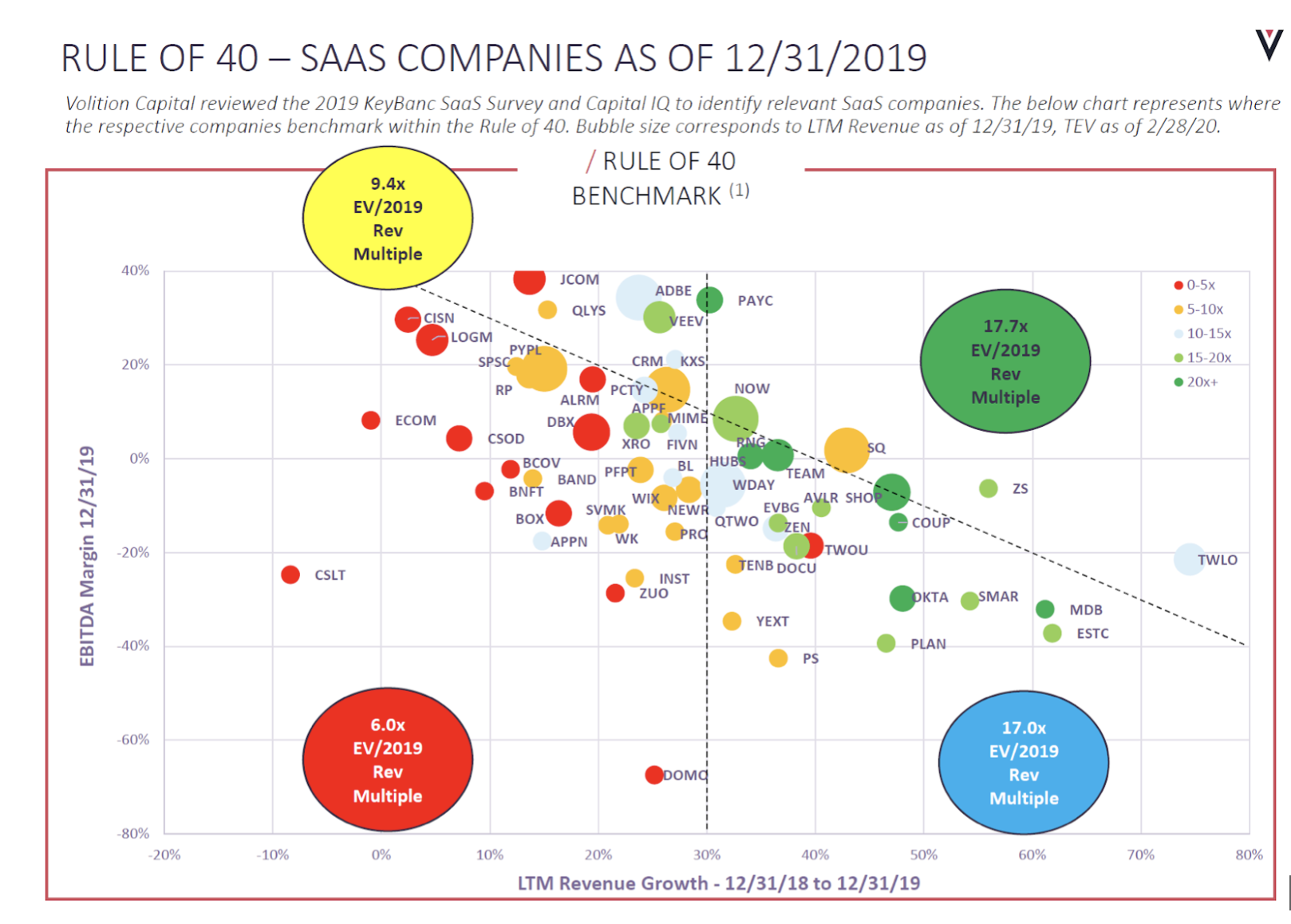 Third, public markets currently appear to be rewarding growth over profitability when determining revenue multiples. Despite shifts in profitability and growth from 2018 to 2019 that saw fewer companies beating the Rule of 40, the charts have one thing in common: the median revenue multiples for the two right quadrants were higher than the left two quadrants. This indicates that the current market rewards growth over profitability, and as companies grow more rapidly, their multiples increase.

The 2019 chart shows an interesting trend: the median revenue multiple was highest for companies in the top right quadrant, where there is a combination of high growth and profitability. Companies achieving the Rule of 40 through at least 30% revenue growth and who are profitable are commanding a premium valuation multiple. The median enterprise value to LTM revenue was 17.7x. The market continues to favor growth, but the combination of growth and profitability yields the highest valuations. Thus the cluster of green and blue companies in the top right quadrant.

Though not perfect, the Rule of 40 is a useful metric. Companies should evaluate their specific market, and capital availability, to determine if sacrificing short term profitability in pursuit of responsible growth is the correct decision. Growth at all costs introduces financing risk and assumes that capital will remain readily available to fund continued losses.